“The bridge is burning!”

Our bridge has burned down. I use the possessive pronoun deliberately. When you spend a great deal of time at a certain place over many years you take possession of it. And in that sense, the old wooden bridge that crossed the Pike River on West Saari Road belonged to us.

The phone rang around 2:45 p.m. on July 12. Our friend and neighbor Mickey White, who works at the Timberjay in Tower, said, “The bridge is burning.” A report had just come over the scanner about the fire. The address given with the report was 6118 West Saari Road, the old Saari farmstead that perches on the east bank of the Pike River just south of the bridge. We all know our neighbors’ fire numbers. The matriarch of our road, 98-year-old Nannie Saari, lives at 6118 with her son Virgil. We are packsackers. They are pioneers. They lend continuity and dignity and deep history to our road, so, of course, we are possessive of them, too.

Those salient details from Mickey – “6118” and “the bridge is burning” – elicited a profound physical response. The body reacts to alarming news in indescribable ways. I grabbed keys, camera, cell phone, and shouted to my husband, David, who was napping, that the bridge was on fire (only an event of this magnitude would be grounds for waking a spouse from a nap). I jumped in one car with our visiting friend, Dennis,  and we tore off toward the bridge. It was the fastest I’d ever driven the one mile to our bridge. The western sky, framed by the pickets of pine, spruce, and tamarack that line our road, was smudged with a huge, black billow of smoke moving rapidly northward. I think I thought at that moment (or perhaps I later imagined I thought this): “Thank God there’s a north wind – Nannie and Virgil are upwind.”

There was a lone person standing in the middle of the road. It was Virgil. Now, three people were standing in the middle of the road. There was little to say and nothing to do. We watched the fire.  More precisely, we watched the smoke. The flames, issuing from the support structures below, formed an almost benign-looking fringe of golden-orange flickers, atop of which rode the more ominous billowing of black smoke fueled by the creosote timbers of the bridge.

The men were pillars of calm. I like to think of myself as a composed person, but an objective observer would probably have described me as fidgety – trotting up close to the bridge edge to take pictures, retreating, trotting back, calling Mickey to say what people always inanely say on cell phones (“I’m here now”) and to state the obvious (“Yes, the bridge is burning”). David arrived with our dog Jack, the first time he (or any of a long succession of our dogs) had ever been at the river on leash. They were followed shortly by Mickey’s husband, Chuck Neil. We now had a quorum of what we jokingly call the West Saari Road Neighborhood Association.

An officer from the St. Louis County Sheriff’s Department drove up and assumed authority, not that there was much authority to command over a small assembly of law-abiding citizens. He wanted us to keep our distance – I assumed for our safety – until he said he didn’t want us to destroy any evidence. In a whiplash, I realized he meant, like, arson evidence. Someone would burn down our bridge?

Time passed fuzzily. Over the next 10 or perhaps 30 minutes, a series of vehicles and firefighters arrived from Vermilion Lake, Embarrass, Pike, Sandy, and Britt townships and the Minnesota DNR. (Virgil, at the height of the response, counted 17 official vehicles of various kinds.) Some were stationed on our – east – side of the river. Some could be seen through the curtain of smoke on the west side of the river. We began to feel superfluous and drifted  home.

The Pike River bridge has been part of our life for 23 years in every season and all kinds of weather. It pulled like a magnet. It was where we went – on foot, bikes, skis – and where we launched canoes and kayaks for cruises on the river and where we crossed in a vehicle when the destination was farther west on the maze of gravel roads through Pike Township. I associate thumping and thwacking across the old bridge timbers in our car with going to vote at Pike Town Hall. Therefore, our bridge was an essential part of democracy – with discharging my fundamental right and responsibility as a citizen. I walked there alone (well, alone with a dog), with David, with friends and visitors, and countless times with Mickey. We swam in the tannic river below the bridge as have all of our water-loving, stick-chasing dogs – Billie, Jabo, Ray, Phoebe, and Rufus, and now Jack. 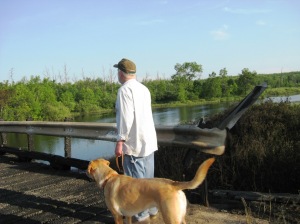 David and Jack on the bridge the morning after the fire.

David, Dennis, Jack, and I went down to the bridge at 7:30 a.m. the next day. It was a sad cup of coffee. Of course, there was an orange-and-white-striped three-panel barricade with night flashers and a big sign with a stark message: BRIDGE CLOSED. We walked around the barricade to the charred black carcass of the bridge. The extreme heat had torqued the metal guard rails in places. The bridge timbers – across which we had thumped and thwacked so many times – were silvery black and cracked like the hide of a crocodile. In the approximate middle of the bridge was a jagged crater of collapsed timbers.

It is far too soon to know the circumstances of the fire (and beyond my interest to speculate – regardless of what or who caused the fire, our bridge is gone). And who knows what lies in store for our river crossing, although it is most unlikely the bridge will be rebuilt. A bridge is a tangible thing with heft and dimension and structural integrity. It is also a metaphor. Parents, aunts, uncles, and teachers instill in children many important lessons, from the practical (brush your teeth before you go to bed) to the ethical (respect your elders). One of those lessons, which at times of high emotion can be difficult to implement, is the metaphor: Don’t burn your bridges behind you. With deliberation, I have burned a couple of bridges in my lifetime when certain individuals became too troublesome to cope with, but for the most part, I’ve taken that message very seriously. A bridge lets you cross where you otherwise could not and it lets you come back again. That is just too valuable an asset to tamper with. The day after the fire, with my sad cup of coffee, I stood with my friend, my husband, and my dog on the edge of the metaphor and saw what the lesson looks like when you break it. 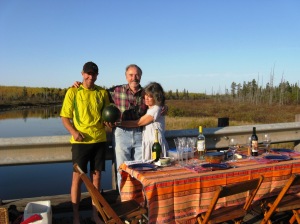 Clifford Scott, Chuck Neil, and Mickey White at the First and Last Supper on the bridge.

Last October – on one of those perfect fall evenings – we had a picnic on the Pike River bridge. We set a beautiful table with real plates, knives, forks, and stemware. We popped a bottle of champagne and ate a meal composed of the last great bounty from our gardens, including a Blacktail Mountain watermelon. We had already started talking about this year’s picnic on the bridge. As it turns out, it was the first and the last supper.

This entry was posted in West Saari Road. Bookmark the permalink.