Everyday but Sunday, Francisco Valenzuela Zavala, a wisp of a man crooked with age, sweeps up and deposits in his wheelbarrow the dust and silt on several blocks of Calle Hidalgo, the street where we live in Alamos.

In the park up the street, Candelario Gastélum, a younger, rumpled, rounder gentleman, sweeps the basketball courts as well as the surrounding grounds. In Mexico people commonly sweep the dirt. In so doing they make lovely ephemeral patterns in the soil. For this task, Candelario uses a palm-frond broom of his own design. He makes a new one every few months.

Francisco and Candelario are public workers, hired by the city to sweep the streets and public spaces of Alamos. Householders and housekeepers — men and women — are just as religious about tidying their own domains. Hardly a morning goes by that I don’t see Doña Sara, our 90-year-old neighbor a few doors to the east, out sweeping her stoop and sidewalk. Don Chato, the caretaker of a house a few doors to the west, bikes to work and starts his day sweeping his stretch of sidewalk. These are just the people I know. There are many others in our neighborhood and all across Alamos who emerge every morning from their houses to sweep.

One thing in the lives of my neighbors is certain: the dust and silt — Sisyphus’ boulder decomposed — will creep in on the breezes and the tires of cars and trucks and be waiting for them and their brooms the next morning. But Sisyphus was being punished. My neighbors aren’t. Sweeping verges on daily devotion. It is certainly the daily norm.

I have never liked to sweep. It makes me nervous and irritable. When I am sweeping I am convinced I have a million – or at least one or two – other things I should be doing. Now, everyday, people around me are sweeping. And they are cheerful. I have daily brief encounters with my sweeping neighbors. If I’m walking, we exchange greetings (which involves shouting to Francisco Valenzuela and Doña Sara, who are deaf). Sometimes I am on my bike, so we wave. I wonder, in passing, how many tons of debris the people of Calle Hidalgo have swept up over the ages. My neighbors have made me think about the broom and if I could at this late date change my attitude about using one. The broom is such a simple tool. It has hardly changed in design in two centuries (as explained on the Web site “How Things Are Made,” http://www.madehow.com/Volume-6/Broom.html#ixzz3H0SqGE3y).

Simple things can be complicated. Any item that can be mass-produced to meet demand in millions of households can become in a global economy the subject of heated debate. In 1994, the broom — that is, the classic broom made of broomcom, a species of sorghum cultivated specifically for use in broom making — became the subject of a fierce dispute between Mexico and the United States when the North American Free Trade Agreement lifted import tariffs on cheaper brooms manufactured in Mexico. American makers of brooms argued for keeping stricter tariffs but lost the argument. This ruling pretty much obliterated the broom-making industry in the United States (http://www.sice.oas.org/dispute/nafta/english/us97801a.asp#).

I recently bought a new broom at Ferre-Carpintero, the hardware store down the street from us. It was manufactured in Guadalajara. It cost 48 pesos ($3.54 in U.S. dollars).

Brooms and mops in the window at Ferre-Carpintero, my neighborhood hardware store

On the morning of October 24, 2014, I began my rehabilitation with regard to sweeping. I emerged from my house at about 7 a.m. with my broom to sweep my stoop. What could I like about this, I asked myself? The light is golden at this time of day. That’s the first good thing. Children in their uniforms, some accompanied by parents, were walking to the elementary school a block from us. Mexican parrotlets, in their tight formations were flying around making their gossipy chatter. Great-tailed grackles were on the utility poles posturing and crackling (grackles are capable of an amazing array of sounds). I could keep a list of birds heard and seen while sweeping, I thought.

The particulate matter of Mexico, at least in Alamos, is unbelievably fine and gossamery. Sweeping requires a strategic approach and style. Even in the subtlest breeze, you must sweep from upwind. Otherwise the dirt and silt blow back on you. I have a tendency to sweep furiously, with fast and broad swipes, part of my defiant outlook about the task. Not good. This approach, I noted, creates countless tornadic dust devils that fly up and then float down ever so elegantly precisely where I just swept. I modified my strokes. I made them shorter with more of a pushing as opposed to swinging motion — more like putting on the green versus driving off the tee. I was calming down and enjoying being a part of the waking-up day in Alamos.

When I had been sweeping for about 20 minutes, Ángel Esquer Chávez walked by and stopped to visit. He is the distinguished 80-year-old gardener who comes twice a week to tend the trees and plants for our next-door neighbors. As we were talking, he reached out and took the broom from me. Very matter-of-factly. He proceeded to finish my job. Was this chivalry, a lesson in technique, or both, or some other intention altogether, or should I try not to fix a meaning on it? I watched him at work. He was calm, his broom strokes were short and concise, he was not perturbed that some dust and silt were left inevitably behind. He is a master sweeper. I am his grateful student. 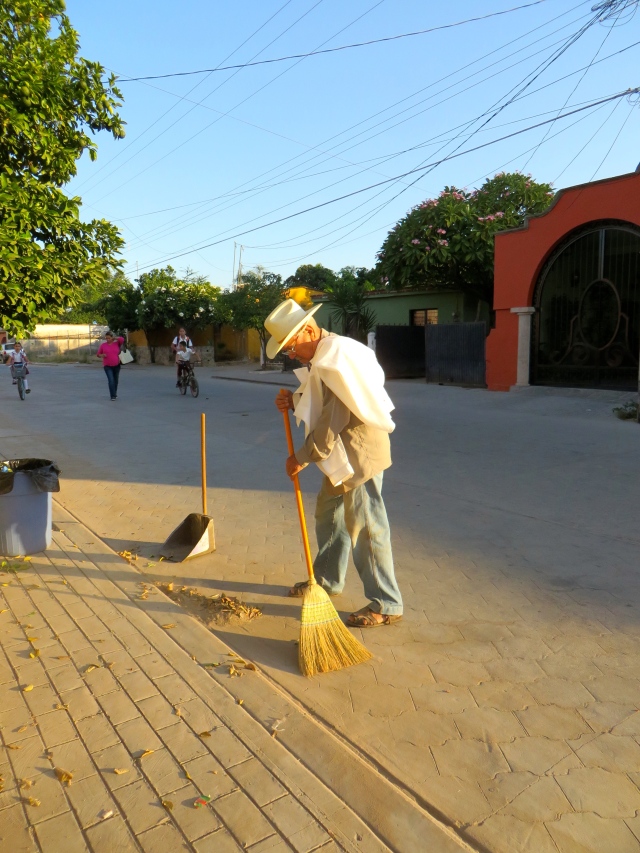 This entry was posted in Mexico. Bookmark the permalink.
Loading Comments...