Three inches, the standard height of the tope.

The standard height of the tope (pronounced TOE-peh) on my street, and around Alamos, is approximately three inches. A tope is a hillock of concrete spanning the width of a thoroughfare – a simple traffic engineering technique ubiquitous in Mexico. Three inches doesn’t seem like much, but driving over a tope at a speed greater than a crawl (<5mph) renders a jolt not good for the vehicle or its occupants.

Topes keep cars from colliding with each other. But their overarching purpose is to keep drivers from running over pedestrians, of whom there are many, many more in Mexico than in the United States. Mexicans are street people by culture and necessity. Many cannot afford cars so they get about on foot or bike. Mexican public schools have two sessions, morning and afternoon, which means hordes of children are on the streets around 8 a.m., 12:30 p.m., and 5:30 p.m., during which times they are horsing around and not paying attention to traffic. On major holidays and Sundays (the one non-work day in Mexico) a small percentage of pedestrians who happen to be men are inebriated and not paying attention to traffic.

I wish my country had more people on the street.

I do not recall ever seeing anyone in Mexico drive fast over a tope intentionally. People do drive over topes by accident and regret it. A lot of cursing can ensue within a vehicle during and after such an error. At least in our vehicle.

In the United States, speed cameras, cops with radar guns, and digital signs that register vehicular speed may tend to slow drivers down, but none of these schemes is as powerful at behavioral modification as the tope. Even young males show respect for the three-inch gradient. 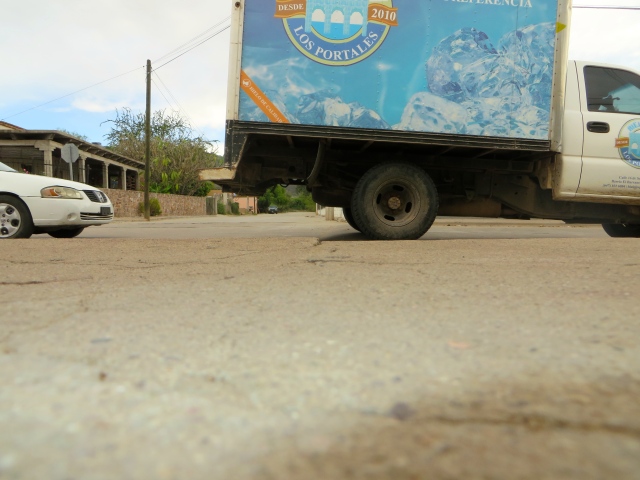 A truck passing over a tope on the verge of the school in our neighborhood, Escuela Primaría Revolución.

Topes, like bookends, are constructed on the verges of schools, churches, markets, public institutions, and other places of high pedestrian traffic. On turnpikes they are used at the approaches to toll booths and frequently at military check points, although only a fool or a hardened criminal would be inclined to speed through a gauntlet of dozens of men and women armed with assault weapons. Topes are at intersections to facilitate drivers turning left and to regulate vehicles entering from a local street onto a higher-traffic thoroughfare.

For reasons I do not understand, the octagonal red STOP sign – ALTO in Spanish –which is a fairly effective behavioral modifier in the U.S., does not seem to register as an authoritative symbol in the parts of Mexico I am familiar with. We no longer stop at ALTO signs that everyone else around us is ignoring and when we encounter an intersection with a four-way stop (Paso por Cortesía) we do not assume the other drivers understand the concept. Those signs should read Paso con Tu Vida en Tus Manos.

A pyramidal tope in an older part of Alamos.

Topes come in many shapes (rounded, squared-off, pyramidal), and even the slightest shape difference can change the whole experience of driving over one. In the older parts of Alamos, many topes are slightly pyramidal. They are wicked. Topes are of different textures (ridged, smooth) and widths (from about 20 inches to a few feet). There is an outlier tope in front of the municipal police station on the edge of Alamos that is about 9 feet long, a width that renders it almost benign, since the wider the tope the more it seems like a natural gradient in the road bed. I don’t understand the purpose of that tope. 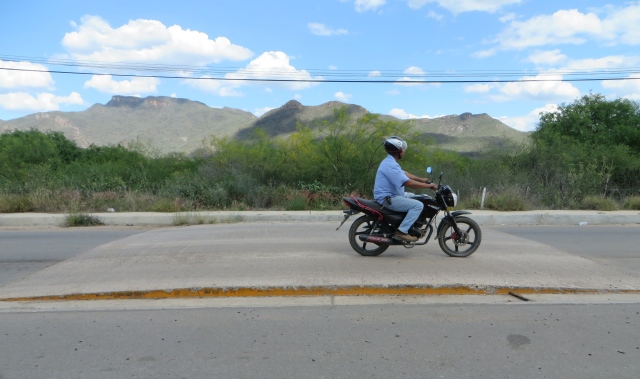 The benign tope in front of the municipal police office.

The height seldom exceeds three inches, which apparently is the engineering tolerance for slowing down drivers without causing their vehicles to bottom out, which might start to foment unrest in the citizenry. As it stands, the citizenry appears resigned to the tope as a minor nuisance of daily life. Topes, however, can be oppressive. On February 18, 2015, during a two-hour stretch driving on Highway 185 through a string of villages between the Oaxaca-Veracruz state line and the city of Catemaco, my husband negotiated 107 topes, an average just shy of one a minute. Some topes are striped or painted yellow, others not. Often, especially on busier thoroughfares, warning signs – either posted at some distance (e.g., Tope 100 meters) or next to the tope (see photo) provide advance warning. But unmarked topes can sneak up on a driver. This can be disconcerting and profanity-inducing when traveling at higher speeds. 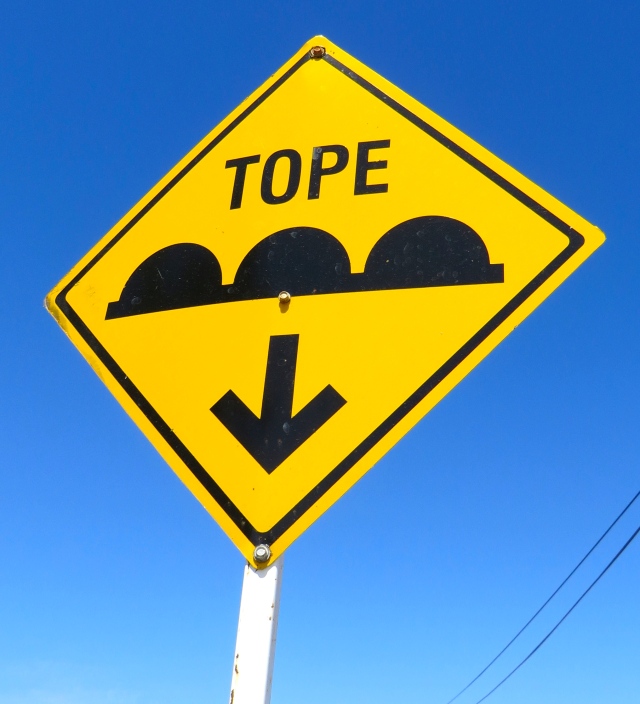 My husband, who does most of the driving, has noticed topes are often obscured by the shade of a tree or shrub and thereby easier to overlook, especially on unfamiliar roadways. While we jokingly assign a sinister plot to the shaded topes, his logical interpretation is that vendors who take advantage of slowed traffic to sell stuff to drivers and their passengers over time must plant vegetation so they have some shade between bouts of peddling their wares.

Thus, the tope is not only embedded in the transportation culture of Mexico; it is also integral to the country’s economy. I wonder if economists have ever calculated the regional economic impact and multiplier effect of the tope. Here are a few things we have purchased from tope vendors: chiltapines (super-hot peppers grown in Sonora), coyotas and empanadas (turnovers usually filled with something sweet), bellotas (acorns), ejotes (fresh green beans), and newspapers. Here are things we have not purchased: caged birds, bootlegged CDs of banda or ranchero music.

Besides protecting the lives of pedestrians and boosting the economy, topes serve another purpose: they promote philanthropy. Many groups, institutional and ad-hoc, collect money at topes. These groups range from Cruz Roja (Red Cross) and Bomberos (firefighters, who are often volunteer groups) to young women vying for local beauty queen and friends of the sick. On February 1, 2015, in the town of Sahuayo de Morelos in Michoacán we encountered our first group of Autodefensas (vigilantes who have lost confidence in federal, state, and local law enforcement to deal with drug trafficking and other organized crime) who were collecting money at a tope. Two men held out a can while two men with firearms stood by the side of the road. We put pesos in their can. This is small-change giving, but in a country where philanthropy is an emerging concept and pesos can make a difference in people’s lives, I think the clinking of coins in a can held out in supplication to a slowing driver may be the highest and best unintended consequence of the tope.

This entry was posted in Mexico. Bookmark the permalink.
Loading Comments...